Each fall, the Astronomy department here at Wesleyan hosts a series of colloquia on a diverse set of topics in modern astrophysics. This is the first post reporting on these events. I’ll generally refer readers to the speakers’ websites for the details on their work, but will record interesting conversations that ensued when the speakers visited and give short informal primers on the research area under discussion.

The first colloquium speaker this fall was Dr. Trent Dupuy of the Harvard Smithsonian Center for Astrophysics. His talk was about “Testing Theory with Dynamical Masses and Orbits of Ultracool Binaries”.  As the title suggests, his work has focused on constraining evolutionary theories of brown dwarfs – intermediate objects that are often summarily described as either “failed stars” or the “missing link” between stars and planets. (For those who have memorized the stellar classification mnemonic, “Oh Be a Fine Guy/Gal Kiss Me”, they comprise additional “Lovingly Tonight Yes!” components of this imperative clause.)

Before the talk, we asked Dr. Dupuy if the current excitement about exoplanets has increased interest in his own work, given the similarities of brown dwarf atmospheres to planetary atmospheres. He answered yes. And no. In some sense analogies can be made, but much of the excitement that is driving the exoplanet searches is the possibility of finding terrestrial planets that could harbor life. Big gassy planets aren’t very relevant in that regard. Apart from their relationship to planets, brown dwarfs represent a rather unconstrained area within our current understanding of the lifetimes of stellar-type objects.  There is an excellent, accessible description of Dr. Dupuy’s thesis project here. Below I discuss some of the key characteristics of brown dwarfs.

Planets, brown dwarfs, and stars occupy a hierarchy based on their internal physics. Stars fuse hydrogen in equilibrium, brown dwarfs do not fuse hydrogen in equilibrium but do fuse deuterium for some portion of their evolution, and planets never fuse anything. Whether an object will fill one of these descriptions is determined by how massive it is. A star shines because of the thermonuclear reactions in its core, which release enormous amounts of energy by fusing hydrogen into helium. For the fusion reactions to occur, the temperature in the star’s core must reach at least three million Kelvin. Because core temperature rises with gravitational pressure, the star must have a minimum mass to provide this pressure. This is the so-called hydrogen burning mass limit, or HBML, as first defined and calculated by Kumar in 1963. Brown dwarfs have a mass less than the HBML which is about 75 times the mass of Jupiter. It was not until the mid-1990’s that the first brown dwarfs were directly detected, and so they are a relatively new field of study. 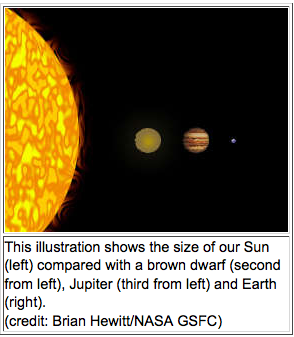 A robust signature of a brown dwarf is its total intrinsic brightness, or luminosity, but only at relatively late times in its lifespan. Just as there is a lower cut off in stellar mass, there is also a minimum luminosity for stars of around one ten-thousandth of the Sun’s luminosity. After a billion or so years, a star’s luminosity will become steady because of sustained nuclear fusion of hydrogen to helium in its core. Brown dwarfs don’t reach this steady condition, but “shine” by slowly cooling, thus gradually lowering their luminosity, eventually below the lower limit for a star. Luminosity is difficult to measure: the spectrum of the object has to be measured across a substantial portion of the electromagnetic spectrum and the astrometric distance to the object must be measured with good precision.

The temperature of a star can be inferred by the presence or absence of features in the stellar spectrum. For instance, the presence of methane is a signature of a cool brown dwarf. Methane can survive only at effective temperatures of less than 1500 Kelvin. By contrast the effective temperature of a star doesn’t drop below about 2000 Kelvin. It is actually the strong presence of methane in Gliese 229B -a much talked-about brown dwarf- that guaranteed that that object could not be a star. Gliese 229B orbits a red dwarf star, in a similar manner as a planet.

It is not uncommon for stars to orbit one another in binary systems. In fact most of what is understood about the relationship between mass and luminosity for typical stars is from the study of binaries. Orbiting bodies are well-described by Keplerian dynamics, in particular Kepler’s third law, which relates the period of an orbit, the mass of the objects and the distance between them. Dr. Dupuy is using the same fundamental procedure of studying brown dwarf binaries’ orbits and physical separations to determine their masses, and in turn constrain evolutionary theories about them. The fraction of binary systems comprised of brown dwarfs is relatively low, which provides a challenge to selecting suitable candidate systems to study.

Observationally, brown dwarfs are at the current limit of both infrared measurements and astrometry detections. Dr. Dupuy’s work has directly probed both of these limits by using laser adaptive optics at the Keck telescopes in Hawaii. While using some of the most advanced technology, he has taken a classical approach to measuring stellar masses by applying Kepler’s laws to binary systems. Observing stellar binaries enabled scientists of the late twentieth century to paint a very consistent stellar evolutionary picture. With improved brown dwarf mass determinations along with the wealth of new planetary data, this century will see the evolutionary details of the intermediate planet-star regime come into focus.

“…in this book as in The Hobbit the form DWARVES is used, although the dictionaries tell us that the plural of DWARF is DWARFS. It should be DWARROWS (or DWERROWS) if singular and plural had each gone its own way down the years, as have MAN and MEN, or GOOSE and GEESE.” J.R.R. Tolkien — Lord of the Rings – Appendix F-II