The Astronomy Department and the Center for the Arts are pleased to sponsor a special talk by Lisa Frattare (G ’96) of the Space Telescope Science Institute in Baltimore, MD.
Her talk is entitled “The Beauty of the Universe as Revealed by Hubble”.

Lisa Frattare has been a member of the Hubble Heritage Project since 1997. En route to illuminating the forces shaping our cosmos, the Hubble Space Telescope has accumulated a cosmic zoo.  The Hubble Heritage Project sees this instrument also as a tool for extending human vision, one that is capable of building a bridge between the endeavors of scientists and the public.  Hubble Heritage images have been featured in many venues, including as U.S. and U.K. postage stamps.  In this illustrated talk, Ms. Frattare will pique our awe and curiosity about the universe we inhabit.

A reception at the Van Vleck Observatory will follow and include viewing through the telescopes, weather-permitting. 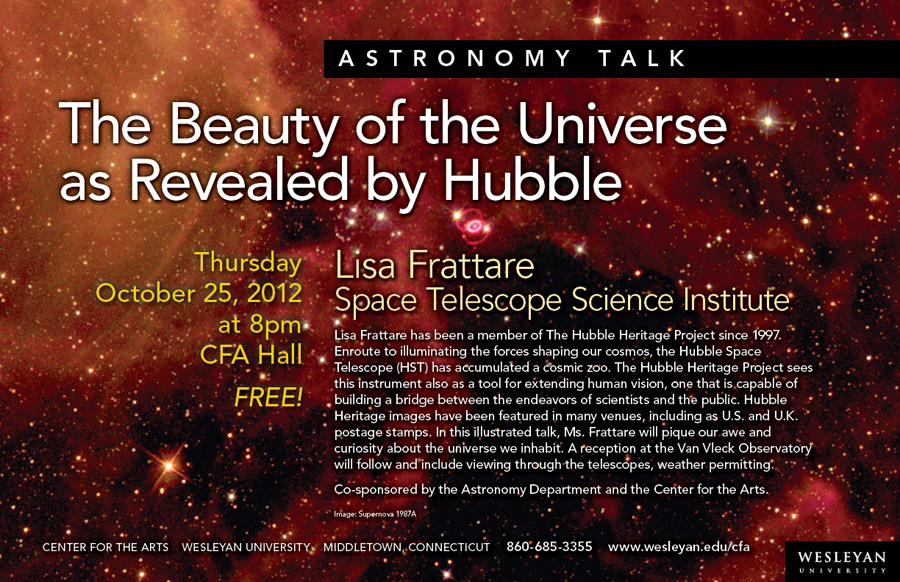