The 26th Annual Undergraduate Research Symposium of the Keck Northeast Astronomy Consortium (KNAC) was held at Williams College on Saturday, Oct. 17, 2015, and Wesleyan was well represented! Six students presented results of their summer research: Julian Dann, Aylin Garcia Soto, Cail Daley, and Girish Duvvuri gave oral presentations while Rachel Aronow and Avi Stein presented a poster. Several other students came along to enjoy the weekend, which featured a dinner and social event on Friday night, the seminar on Saturday and breakout sessions on such topics as Inclusive Astronomy and how/why to program in Python. Over 100 students and professors from KNAC attended and a good time was had by all! 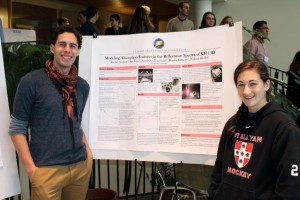 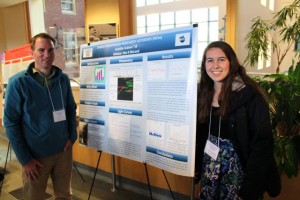 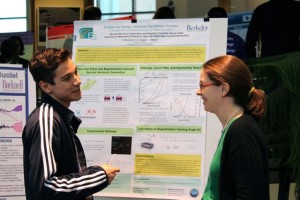 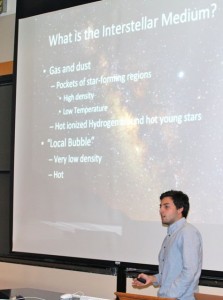 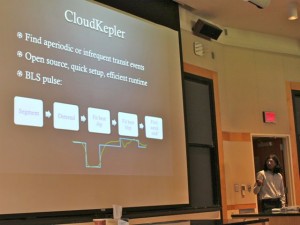 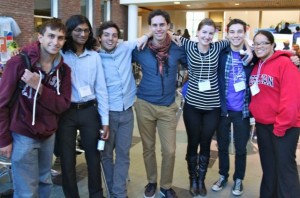 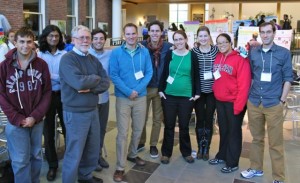 Last night the Astronomy faculty and staff were treated to spectacular views of our favorite objects through the fully refurbished 20-inch Clark refractor! The telescope performed flawlessly and views of the Ring Nebula, Andromeda, Uranus, a couple of globular clusters, Albireo, etc. were breathtaking. The computer control quickly and accurately slews the telescope to objects selected by name, seamlessly flipping it to the appropriate side of the pier. It is a wonder to watch and to look through. The telescope will be open to the public on Homecoming Weekend and we will be establishing a regular schedule of public events with it in the months to come. Congratulations and many thanks to Roy Kilgard and Fred Orthlieb for seeing this all through! Thanks also to our many generous donors and supporters inside and outside the University.

Myles Standish, a Mathematics major and Astronomy MA graduate spent most of his professional career at the California Institute of Technology’s NASA Jet Propulsion Laboratory (JPL), creating and continually improving high-precision planetary ephemerides (orbital positions) vital to the successful navigation of planetary spacecraft. Those ephemerides are now the world’s standard, providing data to virtually all of the national almanac offices, astronomical researchers, and observatories.

A recognized leader in his field, Dr. Standish has been chairman of the American Astronomical Society’s Division on Dynamical Astronomy (AAS/DDA) and president of the International Astronomical Union’s Commission 4 (Ephemerides). He received the AAS/DDA Brouwer Award in 2000 and NASA’s Distinguished Service Medal in 2008. Asteroid “3420 Standish” is named in his honor.

Dr. Standish maintains that Wesleyan pointed him toward mathematical astronomy when its first computer was squeezed through the basement window of Van Vleck Observatory. He followed bachelor’s and master’s degrees here with a PhD at Yale University.

Father of three sons, Dr. Standish later volunteered for 25 years with the American Youth Soccer Organization as a game scheduler, regional commissioner, chief referee, and coach. In recognition of his contributions, the city of Pasadena hosts the annual Myles Standish Thanksgiving Tournament. He also was an active member of the local YMCA and of his sons’ high school booster club.

Dr. Standish is now retired and lives with his wife on the shore of Lake Keowee in South Carolina. He is involved with community affairs and gives lectures on a wide variety of topics through the Osher Lifelong Learning Institute at Clemson University. He also continues to referee professional papers, answer questions on astronomy, and fulfill computing requests from astronomers around the world.

Wesleyan astronomy students and faculty traveled to Vassar College for the 24th Annual Undergraduate Research Symposium of the Keck Northeast Astronomy Consortium (KNAC), held on October 25 and 26, 2013. About 85 astronomy faculty and students attended the one-day symposium, listening to talks by students at our institutions who did summer research projects in astronomy. KNAC is currently supported by an NSF grant to Wesleyan University. Member colleges are: Colgate, Haverford, Middlebury, Swarthmore, Vassar, Wellesley, Wesleyan and Williams. 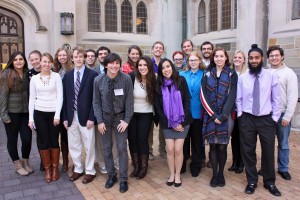 The student speakers at the KNAC conference at Vassar.

Amy Steele, a first year MA student viewed the solar eclipse of Nov. 13, 2012, from northern Australia and sent along the attached photo. She was part of a team hoping to make measurements during totality but it looks like clouds got in the way. Nonetheless, they were able to see parts of the eclipse and she got a very nice image of a partial phase viewed through the clouds.

The unique behavior of this “winking star” was discovered in 1995 with the 24 inch (Perkin) telescope at Van Vleck. We continue to follow it at Wesleyan but most data now comes from the SMARTS telescope at Cerro Tololo Interamerican Observatory in Chile. It has been fascinating to see the light curve evolve over the years as precession of the disk has caused various parts of the orbits of the stars to be covered or revealed.

Just recently the star has brightened again, unexpectedly, and it appears that the previously unseen binary component is now peeking out the bottom of the disk. This phase is not shown in the current animation because it was created before we knew this was going to happen.

An interesting aspect of the star is that when it forms a planetary system (IF it forms one!) the planets will probably transit the stars, just like several systems recently discovered by the Kepler satellite, including Kepler 16 (sometimes referred to as Tatooine, after the mythical Star Wars planet orbiting a binary star). KH 15D may, therefore, be described as a proto-Tatooine.

The summer of 2011 was a banner year for Wesleyan students doing research in astronomy. No fewer than SIX of our students obtained competitive REU (Research Experiences for Undergraduates) assistantships sponsored by the National Science Foundation. Alexandra Truebenbach spent the summer in Puerto Rico at the Arecibo Radio Observatory. Phillip Adams and Nora Dumont were in Sunspot, New Mexico at the National Solar Observatory while Alissa Fersch was in Tucson, Arizona at the National Optical Astronomy Observatory. Ben Tweed spent the summer at Colgate University in New York, while David Amrhein split time between Williams College in Massachusetts and Hawaii, where he observed an occultation of Pluto by its moon, Charon.

All of this follows on the heals of a rare experience last year for senior astronomy major Craig Malamut. He joined an expedition to Easter Island to observe a total solar eclipse of the Sun. For more on Craig’s adventures and studies, please see the article about him in the latest issue of the Wesleyan Connection.

If you are a Wesleyan undergraduate interested in astronomy now is the time to start thinking about research for next summer. A good starting place is the Web site of the Keck Northeast Astronomy Consortium. You will find information about KNAC’s REU program and also links to other REU programs across the nation. Also, if you are passing by the poster outside of the classroom in the Observatory, take a look! There are many opportunities available. Application deadlines are approaching, so it is best to start looking now. What better way to spend your summer?!